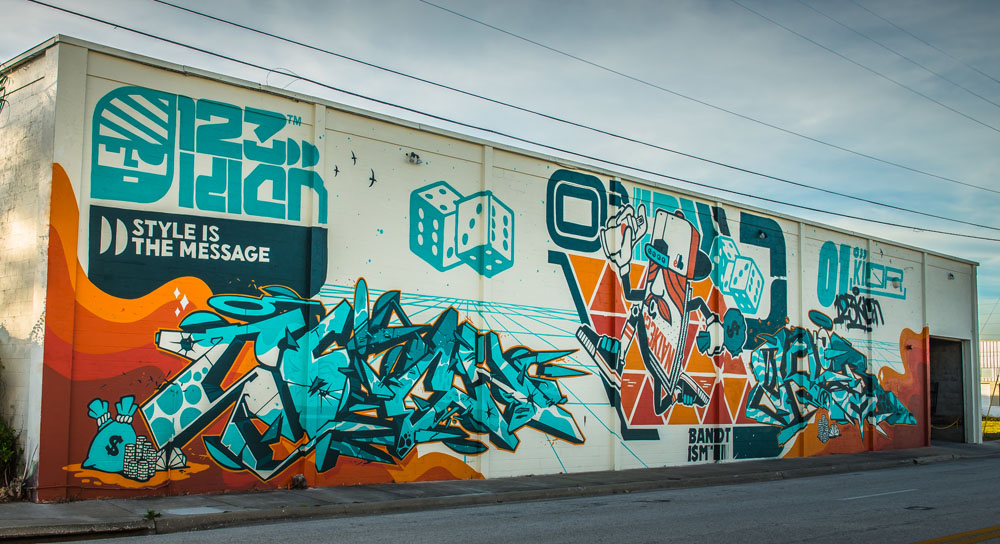 Based out of: Canada

123Klan is a French graffiti crew, composed of husband-and-wife team, Scien and Klor, who have dominated the street art scene for more than 20 years. Now living in Montreal, Canada, 123Klan’s bold character design and iconography has helped them establish a client list from Sony to Scion to KidRobot, while holding true to their graffiti roots.
This mural is at 301 20th Street South, in the Warehouse Arts District. It’s painted by the French artists, 123Klan (“klahn”).

The mural spans the enormous east wall of a two-storywarehouse, 92 feet wide by 19 feet high. Shades of orange and blue against the cream-colored wall were chosen for the Florida location. In the center, a tall cartoon figure drawn as a pack of cards with legs, arms, a thick orange moustache and a backwards baseball cap, is running madly toward the left, clutching a sack marked with a dollar sign, and a can of spray paint.

Jagged piles of blue debris are obstacles behind him, and ahead of him. Behind and ahead of him, big blue pairs of dice are rolling. In the background, a grid of blue lines disappears into the distance, like the grid of a map.

The cartoon scene is scattered with words and numbers, and the artists’ signature, 123Klan, spray-painted boldly on the right in the style of a graffiti tag. Behind their black graffiti signature are large light blue numbers, “01,” and the letters “K-L-O-R,” the first name of one of the artists.

At the bottom, below the running figure, “Banditism,” is painted in black capital letters. Banditism is the name of 123Klan’s clothing line. In the upper left corner is the artists’ large blue stylized logo, with a bearded blue cartoon man with an eyepatch and a jaunty woolen hat. Just below that are the words, “Style Is The Message,” in white capital letters on a bar of black that stands out in this mostly blue and orange image. Beside their logo, on the cream-colored wall, are the shapes of three small birds flying.

Undulating waves of orange flow in from the lower corners corners, under spiky blue piles of debris on the far left and far right. The debris is made of sharp, metallic objects, some with bullet holes. Beside both piles are stacks of coins and hefty cartoon diamonds. And next to the pile on the left, more sacks labeled with the dollar sign.

Many visitors don’t notice that the spiky blue stacks of what seem to be scrap metal on the mural, are actually the artists’ names, with the letters abstracted and tossed together. Like many graffiti artists, their names are now part of the landscape.

123Klan are a husband and wife team from France, based now in Montreal. Their children have grown up to be graffiti artists, painting under the 123Klan name.

The running figure in the center, Mr. Card, is one of the team’s signature images. A flat, humanized pack of playing cards with a backwards baseball cap, a flowing orange moustache, and thick orange hair covering his eyes. His cartoon lips are puckered, like he’s panting from the run. Or as if he’s whistling, knowing that he won’t get caught. 123Klan is printed across his belly, with the letter A upside-down.

This massive mural took 200 cans of aerosol paint. It was completed in three days despite the heat and torrential rainstorms.

Just across the street and a half-block north, you’ll find another stop on our tour, stretching along the Pinellas Trail.

Title: Style is the Message