St. Petersburg arts leaders recall efforts in the late 1980’s to produce an annual event that featured area galleries. Wayne Atherholt recalls, “In 1986, they launched the Holiday Art Tour, which was primarily a retail shopping event at museums, galleries, and other nonprofit arts organizations.

Three years later, the first Saturday night Gallery Hop was organized, eventually becoming an annual event that morphed into Art Express. The event grew and eventually became part of an Artworks! Festival that began in 1987and ran until 1992, celebrating art, music, theater, and dance.

Michele Tuegel writes, “The Florida Craftsmen Gallery (now Florida CraftArt) moved to 501 Central Avenue in 1995 and soon after coined the phrase “Renaissance of the Arts” to describe the changes that were taking place in the City. The Arts Center (now Morean Arts Center) moved to 719 Central Avenue in 1997, and within a year, the two organizations became known as “the anchors for the Arts on Central.”

Mike Shapiro recalls, “In 1996, the DAA produced a Gallery Hop in conjunction with the Festival of States. The next year, galleries and restaurants collaborated to create a themed gallery walk called “Taste of the Arts.” Collaborative efforts among galleries led to the formation of the Downtown Arts Association (DAA) in 1998 (incorporated, 2002). The initial DAA boundaries were Tampa Bay to the east, 9th Street to the west and 5th Avenues North and South.” 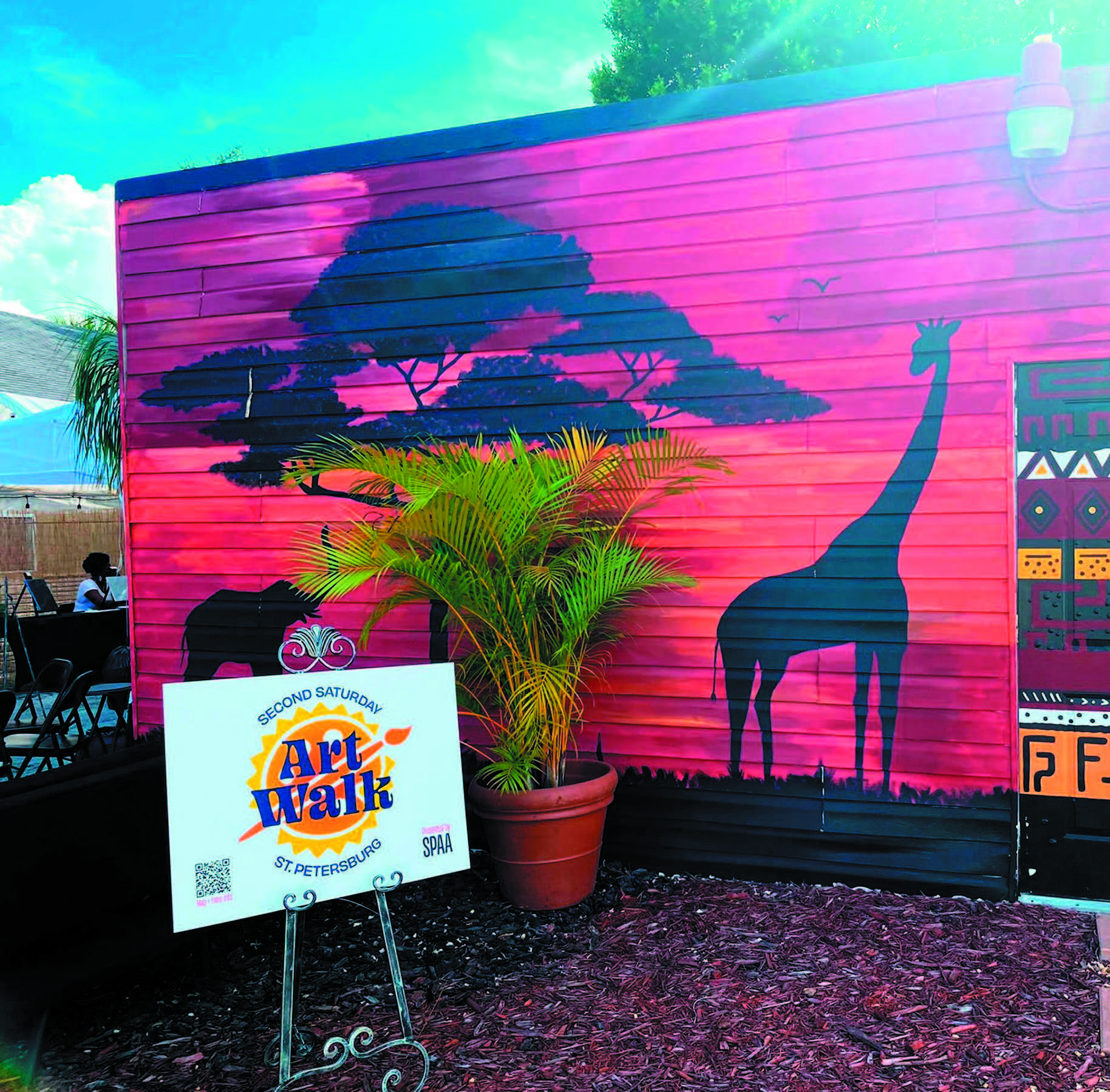 The DAA launched an inaugural monthly gallery walk in October, 1999 with 18 galleries participating. Mary Ann Marger, St. Petersburg Times Art Critic, wrote, “Just having fun, folks. And that’s what the Downtown Arts Association hopes art lovers and others will be doing when they attend the first monthly gallery walk, scheduled for each second Saturday, beginning the ninth of October - tomorrow. And somewhere along the way, that ambulating audience may become enchanted enough with something to buy it. The walks are a revival of monthly open houses several years ago.” (10/8/1999) In 2003 the new Craftsman House Gallery at 2955 Central Ave. expanded the arts business footprint into the Grand Central District on the west end of downtown. The DAA extended its western boundary to 31st St., and in a 2005 DAA brochure, Craftsman House owner Jeff Schorr referred to St. Petersburg as “The City of the Arts.”

With most galleries clustered on Central Avenue, banners were made designating the area as Gallery Central. Restaurants, bars, and other businesses supported Gallery Central, as it was a boon for most of them. The DAA made bumper stickers that said, “Take a Walk on the Art Side.” As the DAA grew, the geographical boundaries began to expand, and trolleys were booked for special events. However, during the economic downturn in 2008, Jeff Schorr recalls that the DAA ran at a bare minimum keeping Gallery Walk going. The 2009 brochure included only 10 galleries that participated in the 2nd Saturday Gallery Walk.

ArtWalk and the arts districts developed hand in hand; and St. Petersburg’s welcoming and aspirational arts community grew as artists moved here. “Pioneering” artists such as Duncan McClellan (DMG Glass) and Mark Aeling (MGA Sculpture Studio) moved into the Dome Industrial Park. Mark and others renamed the area the Warehouse Arts District and founded the ArtsXchange and the Warehouse Arts District Association (WADA) in 2012, expanding the city’s arts footprint and adding studios to what was historically a gallery event. In 2013, the DAA became the Arts Association of St. Petersburg (AASP); however, in 2016, AASP sunsetted and its members came under the St. Petersburg Arts Alliance umbrella.

In 2013-14 the St. Petersburg Arts Alliance “named” the Beach Drive area the Waterfront Arts District; and with Florida CraftArt, named the 600 block and adjacent blocks the Central Arts District. Arts leaders further up Central Ave. later named their area the EDGE District (Entertainment, Dining, Galleries, Etc.) which bordered the Grand Central District that also had artists moving in, including some from Salt Creek whose building was sold and turned into a parking lot.

Facebook was instrumental in helping organize and promote the arts districts and ArtWalk. Tracy Kennard, owner of Your Virtual Footprint, started posting about ArtWalk on Facebook and Twitter in February, 2012 and on Instagram in 2015. “As a founding board member of the Warehouse Arts District Association with a background in social media marketing, I saw the value in using Facebook and Twitter in early 2012 to drive traffic to the various venues on Second Saturday ArtWalk. Almost immediately some venues moved from having 50 ArtWalk guests to almost 500 the next month. Social media allowed us to reach our local St. Pete community and beyond to cities and counties within driving distance.

“ArtWalk became THE event of the month through targeted, colorful, and descriptive social media posts that created interest, curiosity and most of all, arts advocates. To this day we continue to use social media marketing to expand our audience, build connections and go beyond our borders, touching the lives of art collectors while welcoming new artists into the area.”

Trolleys Link the Arts Districts as One Arts Destination 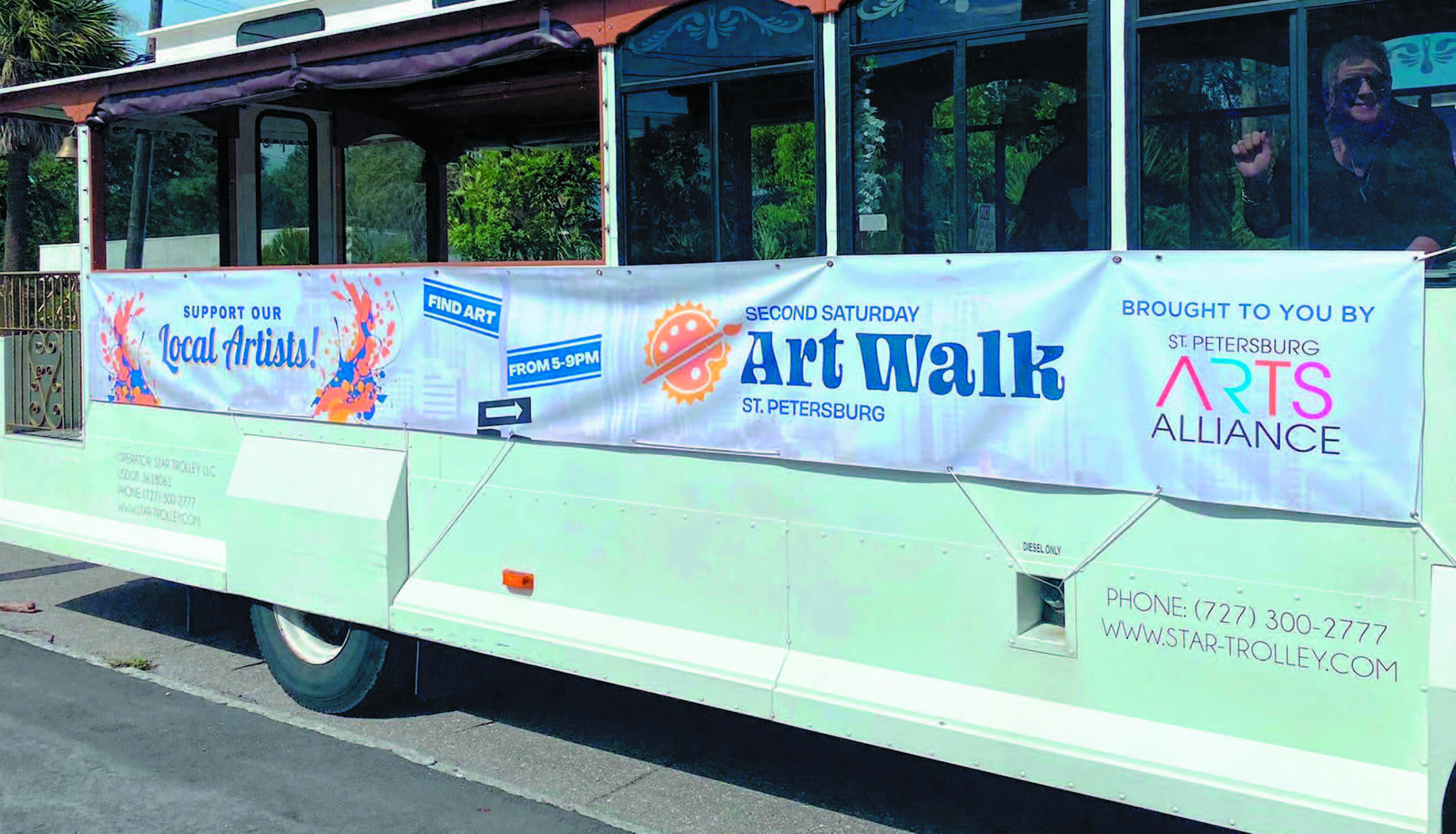 In 2012, WADA and the DAA began working with the St. Petersburg Downtown Partnership to charter trolleys, design the routes, and determine stops. The trolleys were promoted as a free, convenient, and safe way to visit all the districts. Mark Aeling writes, “In 2012 with the help of City Council member Jeff Danner, WADA introduced the trolley component into the ArtWalk in an effort to familiarize the community with some of the lessor known arts establishment hidden away in the warehouses of the district. Leasing trolleys from the Downtown Partnership was instrumental in the development of the district. The original trolley route circulated within the district boundaries, however after experiencing significant success it was expanded into a second trolley line that ran downtown and met at a shared location for transferring routes. This plan evolved into one route with 2 trolleys when the Arts Alliance took over responsibility for planning the trolley.”

However, without centralized organization, it was difficult to manage the process and pay for the trolleys without centralized organization. In August, 2013 the St. Petersburg Arts Alliance convened an organizational meeting of arts district leaders. Executive Director John Collins offered to provide management and marketing for Artwalk, including fundraising to pay for the trolleys. The proposal was accepted and an ArtWalk steering committee was formed with representatives from each arts district. They developed guidelines for participation by galleries and studios, and changed the name from Gallery Hop to Second Saturday Artwalk St. Petersburg.

An Arts Alliance intern designed an ArtWalk logo and SPAA printed large display signs. The signs had extra white space so that each studio or gallery could decorate their sign as they wished. Volunteer Jeff Danner constructed eight-feet-tall easels so that the signs could be displayed on sidewalks and be seen above parked cars.

Media releases from the Arts Alliance went out monthly to an extensive media list. An advance release was sent to participants so that they could personalize it to promote their specific shows, amplifying marketing every second Saturday as Opening Night for the visual arts the city. Studios and galleries began to plan their show openings on second Saturdays, knowing that collectively they would draw more visitors. Such consistent promotion led to coverage in monthly magazines and travel columns that require long lead time publishing schedules. The Arts Alliance also began branding St. Petersburg as a City of the Arts, encompassing the growing arts districts, and performing arts venues and museums.

With frequent and consistent messaging, ArtWalk began garnering widespread monthly local media notice. On August 8, 2014, The St. Petersburg Times published, “ArtWalk brings diverse communities closer through the arts and visitors to St. Petersburg. People will take a safe trolley to creative places they would not otherwise visit. It is critical that we build upon this early cooperation and make an investment in capacity building for the artists and creative businesses that are helping brand St. Petersburg as a City of the Arts.”

SPAA identified ArtWalk as an economic driver for sponsors and funders. They collected monthly visitor numbers from the participants, and trolley drivers counted ridership. While somewhat inexact, the figures over time showed consistent trends. ArtWalk was attracting approximately 3,000 visitors every month to more than 40 galleries and studios with 200+ artists participating. In good weather, visitor numbers reached 4,000. Of course, some visitors went to more than one gallery; however, to each gallery they represented a unique buyer. Duke Energy was a welcome sponsor, and the Courtyard by Marriott Downtown also signed on.

ArtWalk has grown from a boutique event into one of the largest such arts events in the country. Local lore is that for over 20 years ArtWalk has been produced every single month. Only hurricane Irma caused a cancellation in September, 2017. However, the Covid pandemic shut down the trolleys, and the Arts Alliance implemented ways for ArtWalk to go virtual from April to September 2020. Grants were procured to film 30 gallery and studio video tours to facilitate a virtual ArtWalk on the website and on YouTube.

In March 2022 the Arts Alliance produced a new logo and signage and purchased weekly advertising on WUSF for six months before the eventual return of the trolley. Currently one trolley is providing transportation and acting as a “travelling billboard” promoting that ArtWalk has returned.

St. Petersburg’s moniker as a City of the Arts is supported by a fragile arts ecosystem. An influx of developers who are purchasing real estate in areas that the arts community made cool is now causing galleries to relocate or close. Rents are becoming too high for studio owners. Ironically and sadly, the EDGE District no longer has any galleries. Condo or apartment buildings with artsy names have replaced them. A few galleries have moved to other areas outside the ArtWalk trolley route including Dr. Martin Luther King Jr. Street.

Jeff Schorr of Florida Craftsman Gallery states, "The arts are referred to as the catalyst that sparked the renaissance of St. Petersburg. However, through it all the lack of arts funding by the city has remained consistent. ArtWalk is the sole avenue for support of the for-profit galleries."

What is past is prologue, wrote Shakespeare in The Tempest. There are over 36 years of ArtWalk history in its various formats, and I greatly appreciate the arts leaders who provided me with far more info than I could use. Further, there are dozens of others who made ArtWalk and the arts districts successful over the years. For brevity I could not include all the statements sent to me and move the timeline along. Hopefully, as ArtWalk and our arts districts evolve to meet the challenging needs of the arts community, current and future leaders have a literal foundation to build upon. Now that our arts community continues to expand beyond the original district boundaries, Artwalk must find ways to evolve to support everyone. •