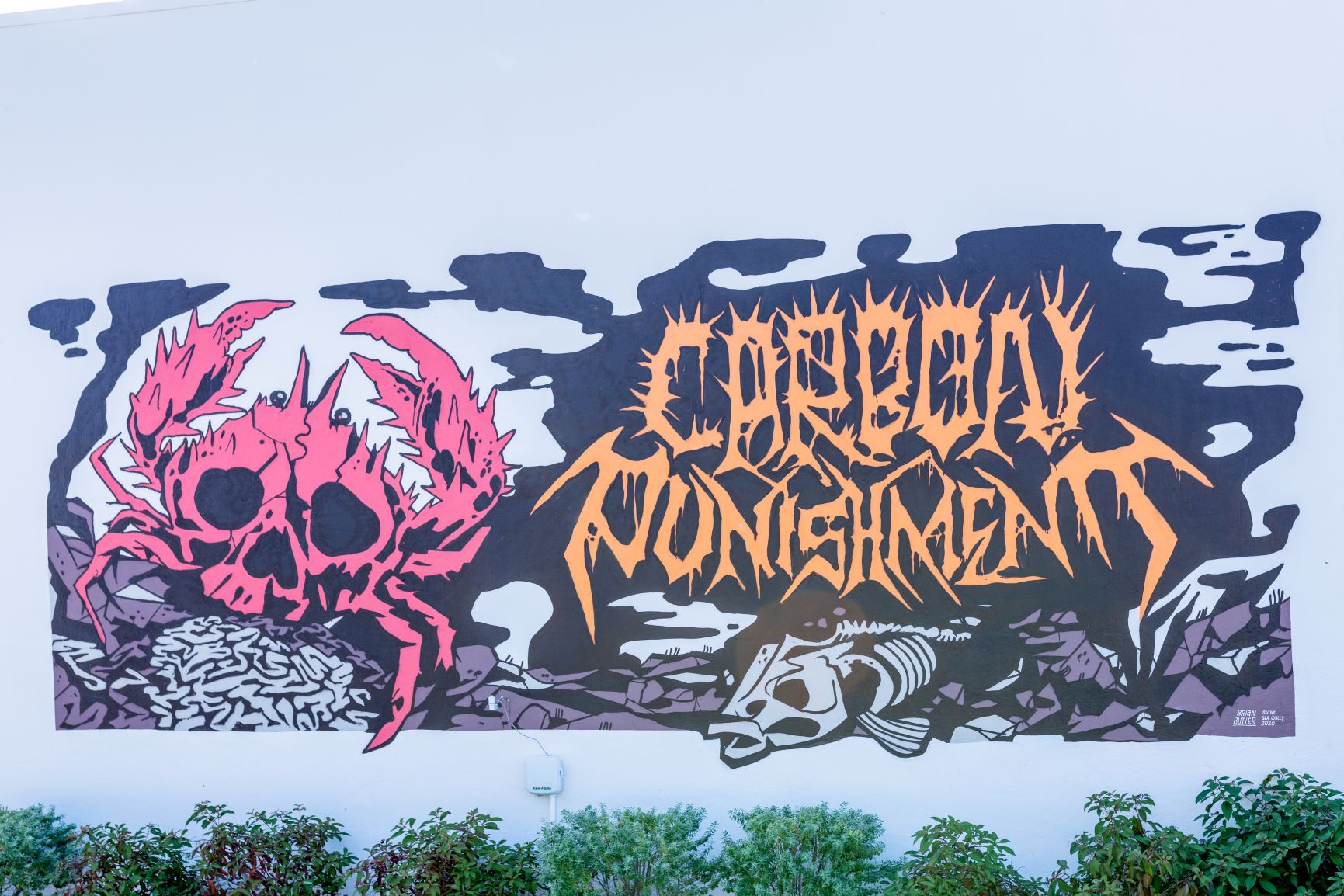 Based out of: Miami, Florida

Brian Butler is a Miami based artist, who's life has been guided by music for multiple decades. He has serviced musicians and festivals across nearly every genre imaginable with custom branding, murals, merchandise and album artwork. His move to Miami was hinged entirely on once catching a really good Iggy Pop concert. From 2010 until the death of live music in 2020, he could be found in venues across the country illustrating concerts. His collection of Show Drawn concert sketches exceeds 2000 performances, and has been exhibited nationally with Superchief Gallery, Subliminal Projects, and Simmons University's Trustman Gallery.
Carbon Punishment by Brian Butler takes up two walls of the single-story building at 1101 1st Avenue North. One part of the mural faces east, visible to oncoming traffic. The other section is around the corner, on the rear of the building and facing Arlington Avenue to the north.

The mural is part of a multimedia painting-and-music project that’s designed, Butler says, “to amplify the brutality of ocean acidification.” Each wall has a music track to accompany it.

The mural facing 11th Street, to the east, is 60 feet wide and 7 feet tall, beneath a row of high horizontal windows. A line of giant cartoon shells are painted in the colors of the PH scale, what scientists use to measure acidity.

Starting on the left, the color is red – on the PH scale, that means highly-acidic. Heading toward the right, the colors become pink and orange as the acidity lessens. All these shells on the left half are drizzled in splotches of black, like oil slicks.

Toward the center, the oily black spots fade away and the shells become yellow and green – meaning neutral – and on the right, the clean shells are bright blue, meaning fairly basic, the opposite of acid. That’s how the ocean naturally is, if it’s not being poisoned.

On the far left of the mural, a dark pink scallop shell overlaps a red coral branch. The shell appears eroded, with pockmarks and a skull’s grinning face in black, worn into the surface. Next, two shells in shades of pink, then four in shades of orange. Two other skull faces are worn into these orange shells – echoing a jack o’lantern, or a mask..

As the shells become yellow, green and blue, and the water becomes healthy, small blue air bubbles float up between the shells. There are two shells in green and four in blue, on the healthy side of the wall – including a clam, a sand dollar, a starfish and a branch of coral.

The wall around the corner, facing north, illustrates the ecological collapse of the sea. This wall is 28 feet long and 9 feet high.

On the left, against a white background with oily black swirls, a large red crab with a black skull face crawls along the brown sea floor. On the right side of the wall, the words “Carbon Punishment” in scratchy gothic orange lettering on black, take up most of the image. A black and white fish skeleton lies on the brown sea floor.

Each wall is accompanied by a brutal grindcore track, composed specifically for this mural. You can find the soundtrack on your phone, at carbonpunishment.bandcamp.com [“carbonpunishment-dot-bandcamp-dot-com”].

The tracks were written and produced by Miami metal-heads Ale Campos [“AH-lay CAHM-pohs”] and Eric Hernandez, and contain lyrics that carry the same biting message as the murals.

The music is an extension of their #deathtoplastic [“hashtag-death-to-plastic] initiatives.

Brian Butler is based in Miami, and often works with musicians and festivals. His collection of live “Show Drawn” concert sketches was created at more than 2000 performances, and it’s been exhibited nationally.