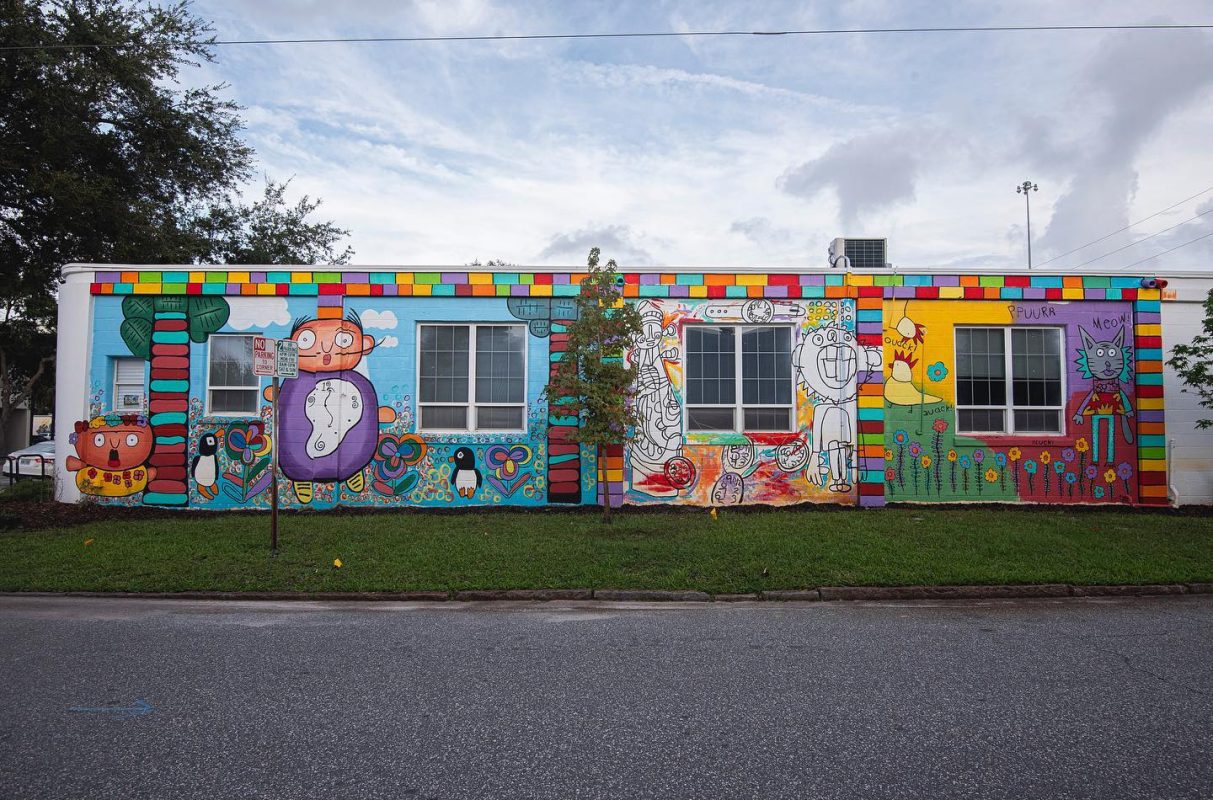 About Todd Frain and Creative Clay

Shining bright in the Warehouse Arts District, St. Petersburg artist and Creative Clay teacher Todd Frain collaborates with Creative Clay students to create a mural on the west side of the building. Students had the opportunity to incorporate their own designs and help paint the mural.

The mural at 1846 1st Avenue South is on the west wall of Creative Clay, facing the traffic on this busy street. 15 feet high and 60 feet long, it’s a riot of color and cartoon-style characters painted by Todd Frain, using designs by Creative Clay artists.

The artwork of Creative Clay is vivid and unexpected, full of color and surprises. And now the outside of their building is as colorful as the work that’s happening inside.

The mural is a striking burst of shapes and color for cars zipping past. But it’s rich in detail that rewards close exploration.

The wall is divided into four colorful pictures, each one framed by stacks of bricks in not-quite-random patterns of red, orange, aqua, green, purple and gold. Two bands of horizontal colored bricks run along the top. Each picture is painted around the windows in the wall.

Starting on the left-hand side, near the front entrance, a fat cartoon baby whose round head is bigger than his bulbous body, shouts and waves, wearing a yellow onesy with red and pink flowers and a crown of flowers in purple, red, gold and turquoise.

Beside the yelling baby is the thick trunk of a palm tree that stretches past the roof. The trunk has thick rings, like palm trees do – but these rings are turquoise and shades of brown, like a stack of fat, horizontal pancakes. At the top, three wide green leaves dangle below the roofline, as if the tree stretches far beyond the strip of painted bricks on the top edge.

On the other side of the tree is a penguin with an orange beak, looking up at a wild flower that’s just a bit bigger than him, with wide looping petals of every color – and one green leaf, and one orange.

Beside the flower is the figure that stands out to drivers as they zip past – a cartoon Salvador Dalí with a fat purple oval body and a melting clock across his chest and belly, and stubby arms and feet. His head is a wide horizontal oval perched atop his bulging purple body – with round staring eyes, a fringe of balding hair, pursed lips, wide half-moon ears – and a classic Salvador Dalí mustache arcing out way past his ears on either side.

Another wild-colored flower is at Dalí’s knees, being looked at by another penguin. Who’s neck-deep in giant, loopy flowers before an oak tree with a stripey trunk stretches up beyond the mural’s edge.

In the mural’s next “framed” picture, complex line drawings etched in black on white form a tall abstract totem on the left, a large horizontal watch over a window – and three clocks with the numbers scattered backwards and in different sizes. An exciting three-eyed alien stands tall on the right, with his right ear and jagged hair crossing the line of bricks that form the picture’s frame. Clouds of aqua, gold, orange and red are scattered and smudged between the black and white figures.

The next picture framed by colored bricks is a cheery scene like a children’s storybook. Two yellow roosters with white heads, tall red coxcombs and red beaks stand out in the upper left, with the word “quack!” painted twice, in capital letters with an exclamation point. One rooster is looking toward the alien on the left. A bright blue flower with an orange center floats behind him.

The other rooster peeks in from the upper corner, just his head and shoulders poking past the bricks as he hangs upside down and quacks! – at the rooster below.

The background behind the roosters is rich gold, blending gently into mossy green around the lower rooster’s body. That green spreads over the lower left corner, and tall cheery flowers in gold, blue and purple. All the flowers have bright orange centers and tall wavy stems bristling with neat pairs of leaves.

The flowers run across the bottom of this section, almost touching the window in the center of the wall. Just below the window is the word, cluck! – in capitals, with an exclamation point.

Halfway across the wall, the green background curves into a rich orange red – and the flowers suddenly get shorter, as if the tall grey cat on the right is stepping on them.

The cat is standing on its hind legs, wearing aqua pants with orange dots, a Hawaiian skirt in bright red with gold angled patterns – and a wide purple collar with the black outlines of flowers. The cat’s left arm has a long lavender sleeve and its right arm has an aqua sleeve – both with orange dots. The background of the mural shifts to purple at the cat’s shoulders.

The cat has very tall, very pointy ears, a lavender nose and lips, black stripes on its cheeks, round staring eyes and a worried zig zag on its forehead. Her face is framed in spiky aqua hair and over her head is the the word meow! – with an exclamation point.
Just to the left of the cat, above the window, is the word ppuurr – without a exclamation point. But with two P’s, two U’s and two R’s, like a purr.

The last section of the wall is the most colorful one yet – abstract shapes of aqua, purple, gold, blue, red and orange surging like a tidal wave around a window in the center.

This sweep of shapes and colors seem to burst out of the ground and explode toward the top border, in a giant curve with a jagged aqua fringe along the top, like waves.

In the lower left, one abstract gold eye with a bright red ring and aqua center, makes this a whale, made out of shapes and colors, breaking through the surface of the water, scattering the aqua waves and leaping into a stretch of dark grey sky at the top of the picture.

Todd says, “I love working with students at Creative Clay to push themselves and to see their art grow. It’s cool to see that they’re able to be a part of the mural movement, so I really enjoy painting their art on these walls.

“Creative Clay has helped me find out a lot about art and how much I enjoy teaching.”

You’ll find another Creative Clay mural at 2914 1st Avenue North, where Todd Frain worked with artist Ali Vasquez in 2016, to translate her imaginative artwork into a spectacular mural.