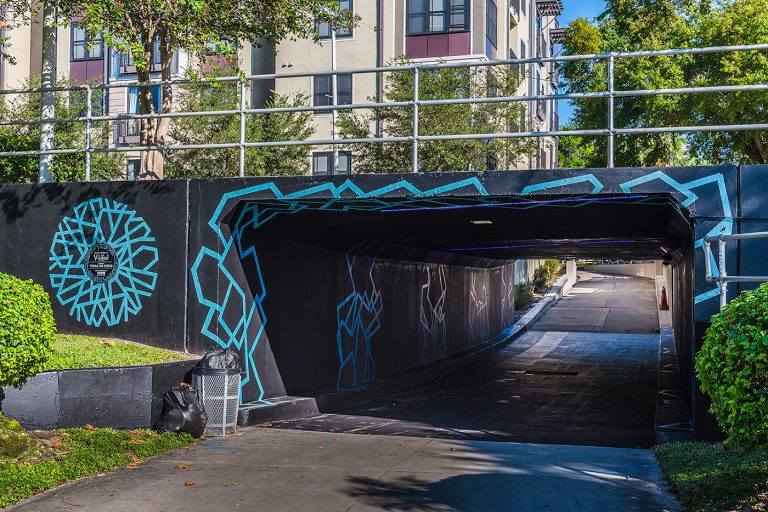 About Ya La Ford

Ya La’Ford is a professor, painter, installation artist, and muralist operating out of St. Petersburg as well as Washington, DC and New York. Her signature use of geometric lines with contrasting light and dark colors can be seen on walls and in galleries throughout the United States.
This mural by Ya La’Ford, titled Tidal de Cinco, covers the tunnel between Central Avenue and Tropicana Field.

The entrance is on Central, down a sidewalk on the south side of the street between 13th and 15th Streets North. The entrance is marked by rows of low, white posts and a sign pointing the way to Tropicana Field. This wide rectangular tunnel, 90 feet long, goes under 1st Avenue South.

The mural covers the interior of the tunnel, and spreads out across the north and south entrances. The background is black. Against the black are geometric patterns made of thin lines of light blue, the color of the Rays’ uniforms. The patterns are Ya La’Ford’s signature image – recognizable around St. Petersburg.

Four jagged gates or pergolas are painted on, spaced out in the tunnel. Each one starts at the base of one wall, extends across the tunnel ceiling and down to the base of the opposite wall. The lines cross and interconnect like maps.

The tunnel is lit by blue LED lights, that bring out the blue of the mural lines.

Ya La’Ford is a professor, painter, installation artist and muralist operating out of St. Petersburg, Washington DC and New York.

She aims to change the notion of what art-making means by pulling art off the canvas. She says for her, the Sunnel is “transformative, so as opposed to becoming a piece on the wall, it becomes something that you actually can immerse into.”

Ya La’Ford repainted her earlier SHINE Mural in this space after graffiti damage.

Her signature use of geometric lines with contrasting colors can be seen on walls and in galleries throughout the United States.