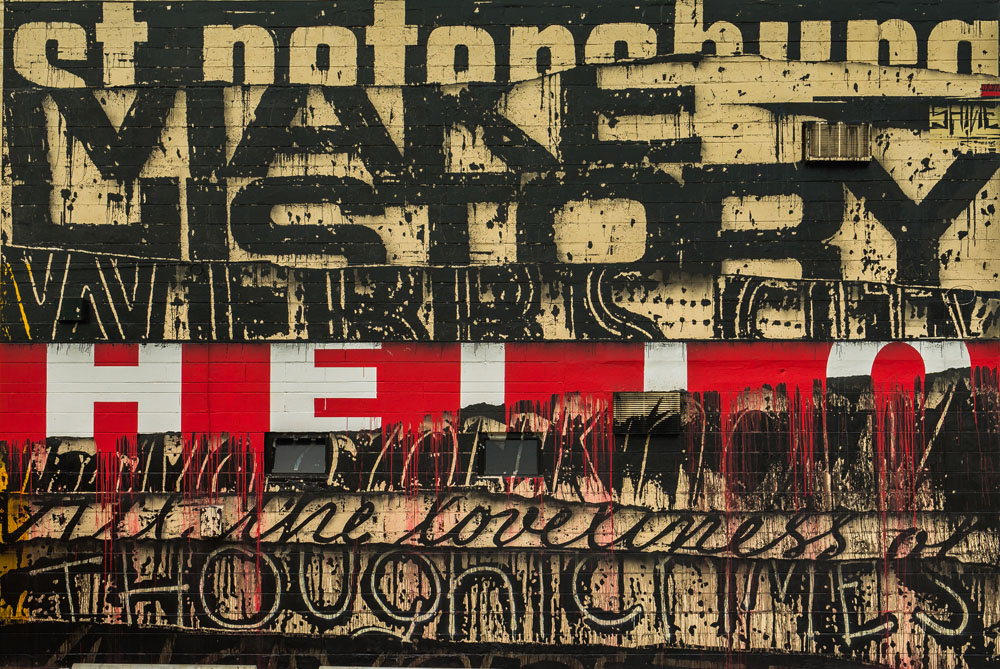 Fleeing communist Czechoslovakia as a young child and growing up under the hot Florida sun, Ales Bask Hostomsky took an early interest in graffiti art.

Now a prolific artist with work in galleries across the country, BASK’s art covers walls from Detroit to Brooklyn to St. Petersburg, and can be seen in the movie, Iron Man 3.

With no formal arts education, no textbook technique to rely on, BASK built a career by leaning into his mistakes. In the same way Miles Davis would purposely bend or crack a note on the trumpet, BASK has learned to harness each drop of paint, accidental or not, as a form of artistic risk-taking. He prefers a less calculated method; starting with just an idea in his mind, culminating in complex paint layers with organic textures and minimal color palettes. Exploration and innovation are key.
This rough-edged mural by the artist, Bask at 1120 1st Avenue North, looks like a weathered wall with many years of signs peeling and fading. Words in different styles of lettering are cut off and obscured by other words, as if the wall is layered with signs that are painted on top of each other, and are now uncovered by decades of hard sun and rain.

In contrast to the many brightly-colored murals downtown, this piece is in sepia tones of cream and black, with one stripe of red across the middle. 34 feet wide by 21 feet high, it’s on a two-story square wall that faces east.

At the top, the black hand-painted words, St Petersburg are cut off at the bottom by MAKE HISTORY in capital letters.

Under that, you can just piece together Webb’s City, the iconic St Petersburg drug store, that opened in 1925 and ruled downtown for 50 years.

The one stripe of color is red, straight through the middle with the word Hello in white. Hello is sheared off at the top and bottom.

Just below, a line of letters smudged by red drips from the stripe above, words that nobody can figure out.

Under that, in cursive, the words, All the Loveliness.

At the very bottom is spray-painted graffiti spelling Thought Crimes, a reference to George Orwell’s novel, 1984. That’s where Bask takes his alias, from the phrase, “Bask in Your Thought Crimes.”

Bask grew up in Florida, after his family fled Czechoslovakia. His murals cover walls from St Petersburg to Detroit, and Brooklyn. And his work was featured in the movie, Iron Man 3.

Just behind you on the left, heading south toward Central, is Chad Mize’s colorful red Monk on The Independent Bar, with the McB’s Clothing guys painted above it in their hipster hats. And on the back of The Independent, a red Chinese mask in a sea of tall green grass and towering pink flowers.