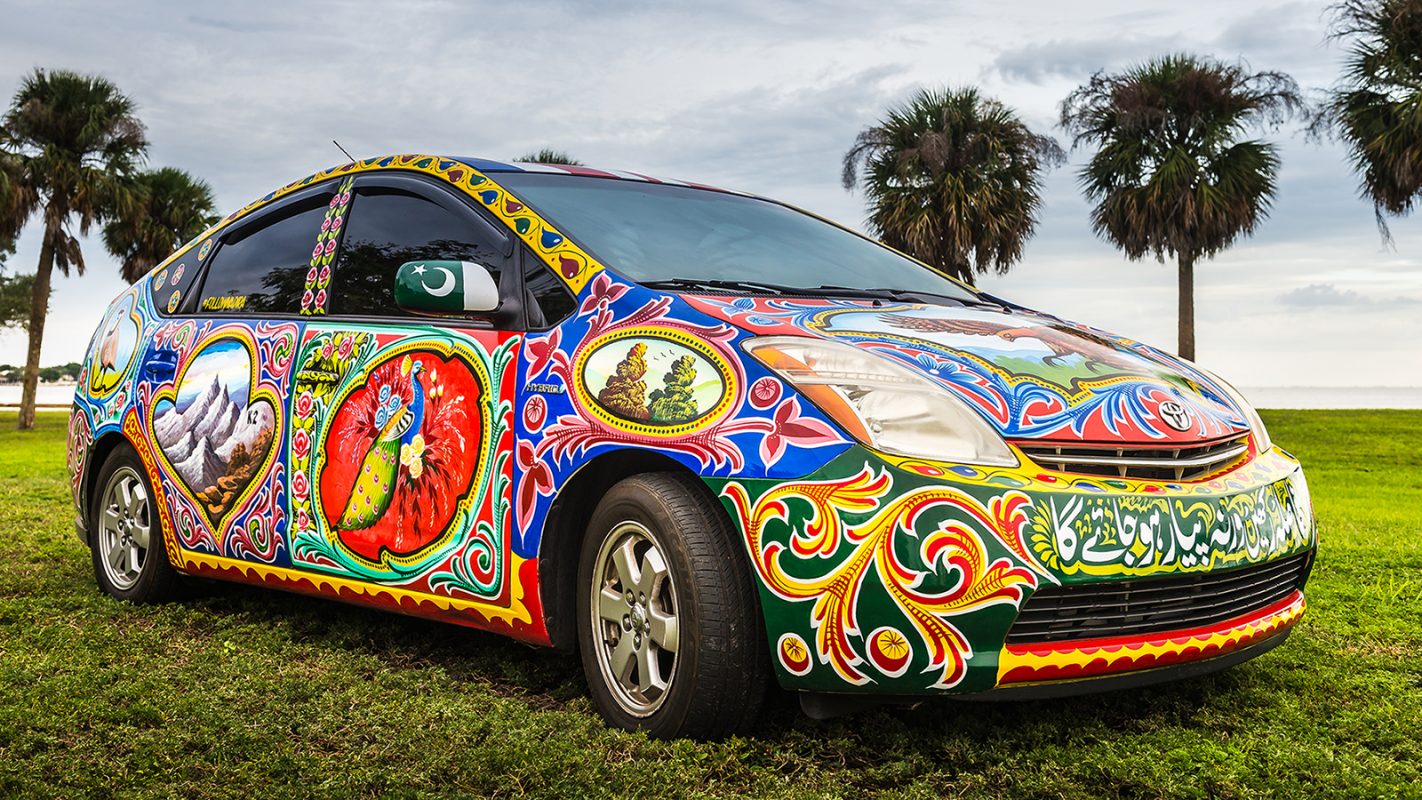 Based out of: Pakistan

Haider Ali is a Pakistani painter best known for his work in the distinctive truck art style, a popular form of regional decoration in South Asia featuring elaborate floral patterns and calligraphy on vehicles. He gained international attention in 2002 when he worked on the first authentic Pakistani truck in North America for the Smithsonian, and has since exhibited at museums and institutions globally.
This mural by Haider Ali is tricky to find. It’s on a compact car that’s owned by Mitzi Gordon – a writer, editor, artist and curator – so the mural moves around St Pete as Mitzi goes about her day. It’s often on display at schools and arts events.

MITZI GORDON: “People stop me all the time – at gas stations or at the grocery store. I get the opportunity to talk about Haider Ali, the artist and his work.

“So Haider Ali, affectionately known – I’m not making this up – as ‘The Picasso of Pakistan,’ came to St Petersburg during the 2018 SHINE Mural Festival to paint a vehicle. He had contacted me through Carmada, an art car project that I run, essentially connecting artists with opportunities to put their work on vehicles. Taking the familiar object, treating it in this unfamiliar way that hopefully inspires people – at the very least, surprises them when they’re out on the streets.”

Haider Ali is a painter from Pakistan, known as a Truck Artist. He tours internationally half the year and became known in the U.S. in 2002, when the Smithsonian Institution added a traditional Pakistani “Jingle Truck” to their permanent collection, and brought Haider Ali to Washington DC to paint it.

Pakistani truck art is a style that started in the 1920s as a form of advertisement. As the tradition grew, it became more ornate. Today, every inch of a Pakistani ‘Jingle Truck’ is covered in intricate patterns, pictures, symbols and language – a mobile mural.

MITZI GORDON: “Haider is what’s known in his home country as a Truck Artist, because there is a decades-long tradition of artists painting in elaborate ways on trucks – and not just box trucks, delivery trucks. But semi trucks will be attacked by a crew of like seven artists to completely transform and make these murals on wheels.

“It’s so much of a tradition there, in fact, that Haider trained under his father, who also was a practitioner of this art form. And a lot of the symbols that you see on the vehicle go back decades and represent things within his culture. And then he gave me an opportunity to have some symbols representing Florida.”

This small car is engulfed by Haider Ali’s lush and layered artwork in rich red, blue, gold, pink, and sea-foam green. Gold on red – and red on gold – filigree patterns hug the edges. Pink roses with green leaves climb past the windows.

Sprawling red and gold shapes like painted-on embroidery echo flames against dark blue, on the front bumper. Pink and red vines twine around the rear, framing the wide-open eyes of a beautiful woman with glowing gold skin on the bumper, looking straight at you, eyebrows cocked, curious.

Decorative red, blue and white stripes stretch along the length of the roof. On the hood, above the wheels and on all four doors are picture frames – some rounded, some with feathered edges, some shaped like bulbous clouds, drawn down to a single point.

Inside these frames are realistic pictures, contrasting with the wild patterns around them. On the hood, a golden eagle, brown and black-striped wings outspread, head turned to the left and clawed feet reaching to the left, a striped tail spreading out behind as if the bird’s about to land. The bird, and the way that it’s positioned, is a powerful motif often seen in Pakistani Truck Art.

On the front bumper, painted in Urdu – in white outlined with black against ornate green patterns – are the words, “Don’t get too close, or you’ll fall in love.” Truck Art often has a sense of humor. This phrase is usually on the back of trucks, but because of the layout of the hybrid, Haider Ali switched it.

Over the right front wheel, the tops of two tall trees show in a horizontal oval frame. On the passenger door, a peacock with a gold crown, royal blue body and a textured, long green tail with pink spots, is set against rich red, surrounded by small gold roses and blue roses, and sprays of wildflowers.

On the right rear door are the sharp, snowy peaks of the K2 mountain, the second-highest mountain on Earth and a striking landmark in Pakistan.

Just past the right rear tire is a pheasant in a heart-shaped frame. The eagle, the peacock, the pheasant and the rose motif, are all Truck Art traditions.

On the left side of the car, are birds and local landmarks of Florida, symbols that Haider Ali asked Mitzi to choose. Over the left rear tire, in a painted-on frame, is a sunset framed by palm trees.

On the left rear door is a painting of the Everglades. A thicket of palm trees is reflected in the smooth blue water.

And on the driver’s door is a tall Sandhill Crane with a distinctive dark red head. In the background, another crane flies past.

On the spectacular rear of the car, roses bloom along the edge of the trunk and a row of reflective, sequinned stickers stretch above the license plate, and rise up in the center. Pink roses with dark green leaves bloom across the sea green rear, around the license plate and a line of white Urdu letters on red.

The high rear bumper is dominated by the beautiful wide open eyes of a woman with gold skin, long black eyelashes and slim arched eyebrows. Her eyes are framed by delicate red and pink filigree twining around them. Between her eyes is a heart-shaped filigree frame, with white words in Urdu on red that read, “Look at me, but with love.”

MITZI GORDON: “He was truly masterful to watch. Did not sketch out anything in advance. Kind of sat and looked at the car for just maybe 15 minutes and then went right in and outlined these sort of windows that you see on the door panels, above the wheel wells, on the hood. Where there’s a sort of a frame that has content inside it. And then began to fill around it with the detail of the filigree.

“Such an interesting process from what I was used to seeing in a wall mural – or even in a traditional painting – where, you know, you work from the bottom up in terms of laying down a whole base of color, maybe particularly in a mural. You work through your darks and then you get gradually your mid-tones and then your highlights on top of that. But it’s all layered directly on top of each other.

“In this instance, it’s not like this whole panel was painted blue, and then there was content put on top of it. He made this window and then painted blue around it. And then painted this outline and then brought the edges together by outlining, for example, this pink piece with white, that just led up to the blue.

“So yeah, everything really precise in how it edges up to each other. All completely freehand, no sketching whatsoever.”

A conversation with Haider Ali about Truck Art – thinkloud65.wordpress.com/2013/06/21/truck-artist-haider-ali

A feature about Haider Ali on KCET Los Angeles – kcet.org/shows/artbound/haider-ali-the-king-of-pakistani-truck-painting