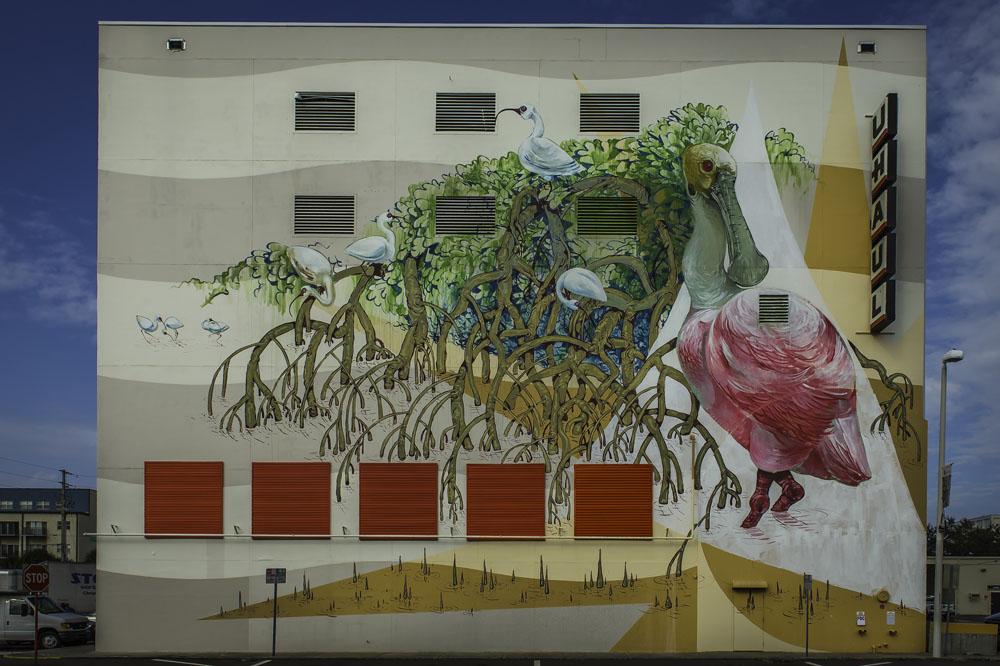 Based out of: Italy

Roman street artist, Hitnes’ brilliant and fluid depictions of wildlife has graced walls across the world including Mexico, Germany and Croatia. This summer Hitnes will be retracing John James Audubon’s 1830s historic trek across 15 states from PA down to FL and across to LA, while documenting and painting murals of native birds along the way.
This mural by Italian artist, Hitnes, is on the U-Haul Building at 975 2nd Avenue South, next to Tropicana Field.

The building is cream-colored concrete, with the pale outline of palm trees on the east and west sides. When you come around the corner to the south, a giant, magnificent bird rises up, a pink Roseate Spoonbill, nestled in the mangroves.

The mural takes up most of this massive wall, 85 feet wide by 47 feet high. The bird is on the right, and almost as tall as the wall. Its head is turned, to look over its shoulder. One deep red eye is staring back at the U-Haul sign jutting out of the building, the plastic letters stacked vertically. His beak is long, and rounded at the end, like a spoon.

The bird’s head is cream-colored, his neck is white and the rest of his body is a deep, flaming pink, sparked by lighter shades of rose. His dark red knobby legs disappear into the water.

To the left of this tall bird is a tangle of mangroves, with green leaves
and spreading roots sprawling across the wall.

The wall still has five bright orange loading docks, up on the second story. The roots reach around these orange doors, before they sprout into the muddy water painted at the bottom of the wall.

Other birds, White Ibis, are nesting in the mangroves. The Ibis are about knee-high, with curving yellow beaks. They wade around the coastline – and often walk along the St. Petersburg streets. Three ibis are fishing in the distance, on the far left.

The mural is a surprising and colorful closeup of nature, surrounded by parking lots and a busy street. The artist, Hitnes, grew up in Rome, in a family of scientists. He’s traveled the world painting street art for decades, and this mural is part of an ongoing project, retracing the steps of biologist John James Audubon and painting local birds in different U.S. states.

The mural does look like a painted illustration in an Audubon guide. Before beginning, Hitnes spent time in the Everglades, observing these birds in the wild. In the 1800s, Spoonbills lined the Florida coast, but because of overhunting, retreated to the Everglades. These lovely birds returned to Tampa Bay in the 1970s, and biologists estimate that 15% of all Roseate Spoonbills now nest in Tampa Bay.

They’re often found around the coastline of St. Petersburg, feeding in the shallow water with flocks of White Ibis and other shorebirds. But when the sun hits their pink feathers, they stand out in the crowd of white birds like a sunset.