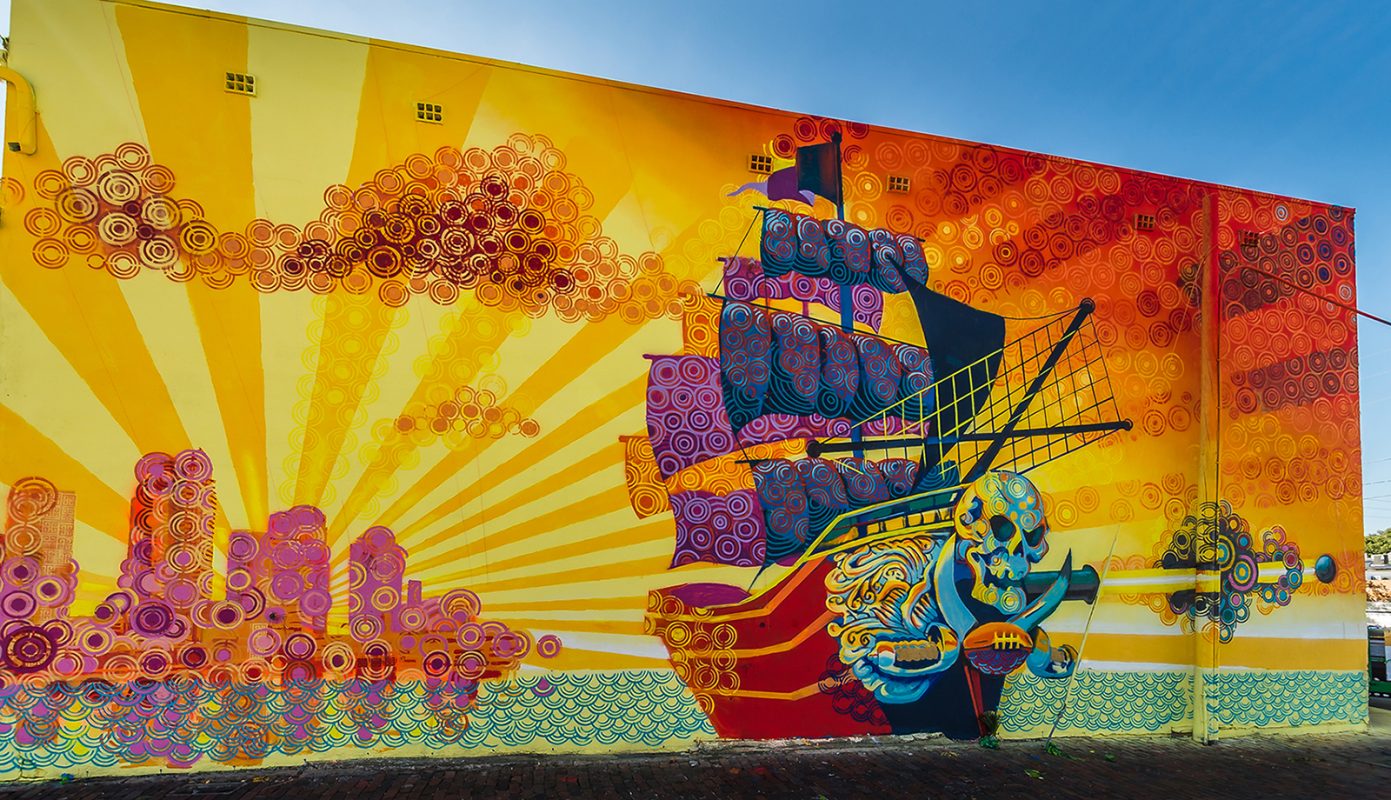 St. Petersburg based fine artist Matt Kress is best known for his intricate style that often combines figures with overlaid geometric designs in multiple layers. His work can be found in studios and art shows throughout St. Pete.
A wild pirate ship with patterned purple sails floats in a glowing red and orange sunset at 128 20th Street South.

On the north wall of the building is The Voyage, by Matt Kress. A gaudy pirate ship stretches as high as the building, 25 feet high on a 27 foot long wall. Skewed toward the right of the mural, as if it’s heading toward us, is an old-fashioned wooden ship with three gold bands and a jaunty, almost cartoon style. The wind fills three horizontal rows of segmented purple sails with light blue swirls, topped by a fluttering, smaller triangular sail, in shades of purple.

Behind these purple sails are three rows of lavender sails, decorated with magenta swirls. Behind those, and mostly hidden, are the edges of two wide gold sails with orange swirls.

An oversized skull and crossbones is the masthead, as big as a third of the ship. Compared to the body of the ship, the skull is enormous, smothering the front of the ship in swirling blue, gold and orange tendrils, like wisps of a stormcloud. Two curving crossed swords arc below the skull, the handles stabbing both ends of a football.

The sunset that splays out behind the ship takes up most of the wall. Wide gold and yellow angled bands burst from the left and spread out like a fan. The sun’s rays are gold and yellow on the left half of the mural, becoming rich red and orange as they pass the ship, toward the right.

Red and orange clusters of circles form abstract clouds, that drift across the golden rays of sunlight and sprawl into the red and orange sunset on the right. The red and orange circles become both lighter gold and darker red as they tangle with the glowing sunset colors, highlighting the outspread rays.

On the left half of the mural, silhouetted in the sunset, are abstract forms on an abstract island, staggered pink vertical shapes that represent the Tampa skyline, covered in a crowd of pink, orange, purple and yellow circles. All the circles have three or more rings, in different shades. It’s a bold, 1970s-style look.

The abstract orange island that these forms grow out of is smothered in colored rings. The rings become bright blue semi-circles as they blend into the abstract sea at the bottom of the mural.

On the right side of the ship, a cannon juts out, blasting a stream of gold fire and a cannon ball toward 20th Street South – an explosion with puffs of blue, yellow, pink and purple circles, instead of smoke.

Kress also painted a wooden utility pole and electrical conduit, so they blend into the mural.

This mural is the first mural by Tampa artist Matt Kress. It was sponsored by the Tampa Bay Buccaneers football team. Kress is known for a layered, geometric style, and influenced by artists like Picasso, Klimt and Chuck Close.

Drivers on 1st Avenue South catch a glimpse of the pirate ship and the wild sunset as they head toward downtown. The mural faces a brick-paved alley.

On this same building is a monumental mural by the artist, DAAS. The bright colors of both murals meet at the sharp right edge of Matt Kress’s mural.