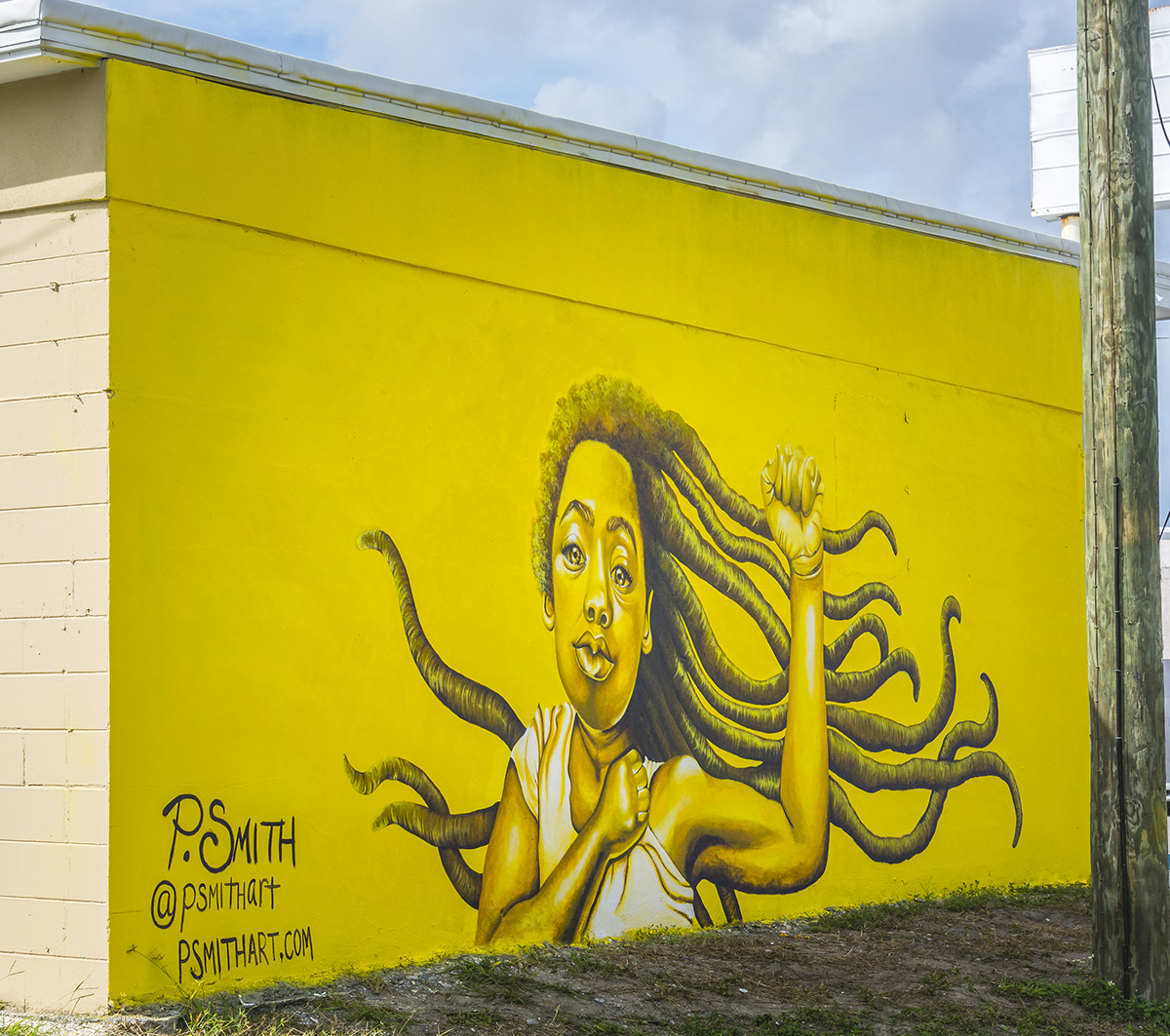 Based out of: Tampa

Tampa-based fine artist, Princess Smith, is best known for her compelling, often provocative portraiture. Highly influenced by her youth spent in one of Los Angeles’ most violent neighborhoods, Smith’s work captures a wide spectrum of emotions from innocence and joy, to despair, anger and defeat. She is a graduate of the University of Tampa with a BA in Fine Arts, her work is collected and shown across the Tampa Bay area.
Golden Child with Da Big Gunz

This glowing golden mural by Tampa artist Princess Smith is just south of the entrance to the ArtsXchange, at 593 22nd Street South. The mural faces east, 33 feet long and 12 feet high. It’s visible to traffic going in both directions.

(audio quote)
“Well, the title is called Golden Child with the Big Gunz.

“I’m inspired by a picture that I took of my little girl when she was about maybe seven or eight years old. And she just kind of struck this pose. And I’ve had this photo in my computer for all these years. And I did a show over at the Morean Gallery at the beginning of the year, and I decided to paint the picture.

Against a rich gold background, a young African American girl with skin of glowing gold and dreadlocks flowing out around her, rises out of the base of the mural, chest high. She raises her left arm – on our right, as she faces us – and makes a fist, to show her mom that she can make a muscle. Her other arm angles over her heart, tugging up her T-shirt sleeve to show us.

(audio quote)
“It’s not necessarily just about girl power or just about strength, it’s so many different things.”

The expression on her daughter’s face is calm, and confident. Her eyes are open wide, looking directly at you, gauging your reaction. Her right eyebrow is cocked, amused. Her jaw is set, determined. Light glints off her nose, her cheeks and lips.

Her image doesn’t fill the wall – the top quarter of the wall is gold, with a wide gold border on either side. But her quiet confidence radiates in all directions. Her heavy dreadlocks undulate around her, seven curving toward the right edge of the wall, a few falling down her back and three kicking up to the left.

(audio quote)
“People ask, well, why did you take the hair down and let the hair flow? Because in the original painting, it was in a bun, which was bound and tied up. Well, when you let it flow freely, it’s free infinite, you know? To spread positivity and to have people look at it and feel that spark feel joy, smile, feel proud, whatever.”

The rich gold color of the mural is inspired by a favorite book and movie Princess Smith remembers from middle school – The Outsiders, by S.E. Hinton.

(audio quote)
“There was this one line where one of the character tells another to ‘stay golden, stay golden.’ And when you think of the color gold, it’s a very high, bright, a really joyous color. And it kind of governs the solar plexus chakra that deals with the joys of life, doing things that you love, being positive and outgoing and free spirited.”

“I had a guy drive by and say to me, ‘Out of all of the pieces, this piece, this piece is a reflection of me and who I am,’ and that’s really important. That’s what it’s about, yeah? To have a guy say that. So I don’t want to label it anything because I want to give everybody the opportunity to feel it and experience it, however they feel it.
“I’ve been hearing a lot of comments from everyone from all walks of life. People in suits, people in work clothes, homeless people, little children, you know? So that makes me happy. That’s very gratifying.”

Princess Smith signed her name “P. Smith” in artful black capital letters, in the lower left corner, with her website and Instagram handle on the gold. She’s a Tampa native with an MFA from the University of South Florida. Her work has been seen in New York and auctioned at Sotheby’s.

Her work in oils and watercolors explores distorted images of African American women caused by slavery and racism – and celebrates children, motherhood and the female figure, in all its majesty.